Carpigiani Helps Spread Culture of Gelato in the US

Culture of Gelato Continues to Spread in the US

Tuesday, February 24th at SoCal Gas Company's test kitchen complex, gelato maestro Luciano Ferrari and John Babila, President Carpigiani presented a crash course in artisan gelato making to select members of the culinary media.  As these classes are hands on, they need to be intimate and small.  We had 100% attendance for this one day crash course in gelato.  Attendees were not only introduced to the ancient art of making artisan gelato but they each were assigned a special gelato or sorbetto flavor that they prepared during the course.  Additionally they learned the history of gelato and earned a chance to become a judge in the next Gelato World Tour scheduled for 2016.

Emily Ellyn, regular contributor to Edible Magazine, Bar Magazine, Winner of the most recent Food Network Cut Throat Kitchen competition (on air again tonight on the Food Network), Winner of Food Network's Cup Cake Wars competition, regular contributor to network affiliates in Central and Southern Florida, CIA Graduate, PhD in Foodservice Education, masters degrees from Academie International de Management, Paris and UFC's Rosen College of Hospitality and Management, Orlando.   She has also made a cameo cartoon appearance in an episode of the Simpsons.  And finally, Emily is the host and narrator of Gelatology, a film about the art, passion, science, history and business of artisan gelato.

Susan Van Allen, writer for Taste of Italia, author of 3 books on travel to Italy

The event was a huge success and has already garnered coveted press from LA times: 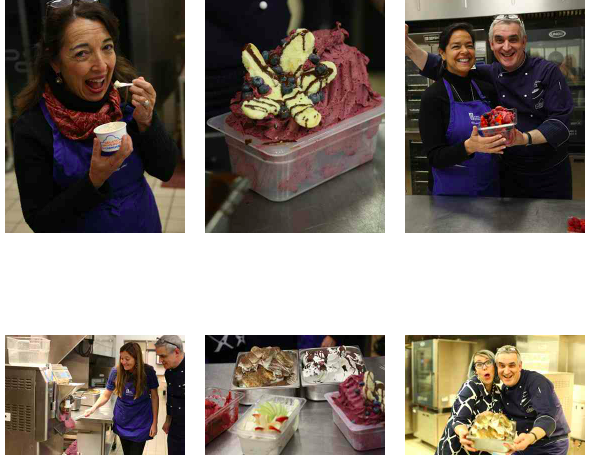 Carpigiani Helps Spread Culture of Gelato in US